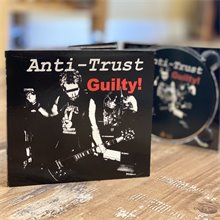 This is a physical CD of the Anti-Trust 'Guilty' album that features 14 songs plus bonus material. This is a very limited first run of 100 hand numbers CDs.

Anti-Trust is a side project by ex-Attitude Adjustment members Rick Strahl and Chris Kontos with a guest appearance of Andy 'Airborne' Andersen. This collaboration produced a handful of songs that were garage recorded in Oakland, California and Maui, Hawaii between 2001 and 2021.

Guilty is a mix of old school hardcore punk rock mixed with NWOBHM roots, kicked out in good old garage style. This album features a mix of originally recorded songs by ex-Attitude Adjustment members Rick Strahl and Chris Kontos from the 2001-2003, and later date studio recorded tracks by Rick (and Andy) that were recorded in 2020-2021. This album features crunchy rythms and catchy choruses with high intensity, in-your-face harmony driven punk rock that brings brings back the mid-80's punk and cross over scene.